As I approach my first decade in the Inzpire family I thought now might be an appropriate time to practice my developing one-finger typing skills and reflect on what has been a fantastic and rewarding, if a little unexpected, second career. Like many of my military aviator mates I invested a significant amount of time, money and brain cells getting the licenses required to transition into civil aviation. It was just what everyone did; the promise of an easy life, guaranteed annual pay rises, plenty of time off, no JPA, etc. And then the financial crisis hit at the end of the last decade and the holding pools many of us found ourselves in died overnight. ‘Shave off!’ 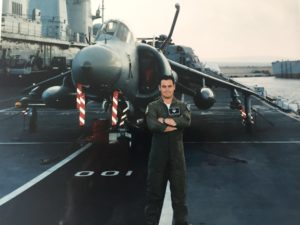 Before I embarked on my second career!

A random, very drunken, chat with a couple of ex-RAF QWI mates in the bar at RAF Lossiemouth and an interview (the first interview I had undertaken in 24 years) later and I found myself working for Inzpire. The Synthetics team I joined at the Air Battlespace Training Centre, RAF Waddington is an independent White Force, contracted directly to HQ Air Command, consisting of a variety of ex-military types from all three services brought together to deliver collective training. It became very apparent that my boss, an F-3 Tornado Qualified Weapons Instructor (QWI) and F-15C driver with eleventy thousand hours and a brain the size of Somerset, had surrounded himself with supremely capable people, all of whom were QWIs, Air Warfare Instructors, Helicopter Warfare Instructors, Tactical Directors and equivalently experienced and qualified Intelligence specialists… and me, the random Sea Harrier mate. Our focus was quite simply to deliver the most rewarding, immersive, operationally focussed total training experience to every unit that walked through the front door; to make a positive difference to how our front-line servicemen and women operate. A decade later, I recently took the helm of this team and our focus remains exactly the same; to have a positive impact on all our training audiences, not just the leaders.

There are thousands of ex-military guys working as contractors in all areas of military business, quite a few of whom remain friends of mine, bonded through our time serving together. When we get together they often talk about their companies and their contracts, etc. often with different experiences to my own, because we are extremely fortunate at Inzpire not to be hindered by process and contract limitations. I may incur the wrath of our HR team when they read this, but I have little idea of what is in my employment contract. We are free to deliver training unhindered by restrictive company policy or contract limitations. The only guidance we use is to be sensible. If a particular course of action is sensible then it will always be supported. We manage our working routines and work/life balance sensibly because we are all trusted to do so. There is no limit to the amount of leave we can take and use the previous sentence as guidance.

In the decade that Inzpire has been an independent White Force we have never quoted the contract to our customer. We are governed by a simple but wholesome remit: to do the right thing even if doing so sees the praise and reward going elsewhere. The team doesn’t need constant reassurance; we know everyone is replaceable so everyone works hard to ensure this doesn’t happen. My remit at the ABTC is to deliver training. There is very little else to add; we could, and routinely are, asked to support activity way left and right of our ‘core’ business or home base and I am never short of willing volunteers for whatever is requested...it’s the spice of life.

Seeing our training audiences improve during their experiences here is extremely satisfying. The feedback we receive from units returning from operations include comments such as "a twelve hour fire fight felt like a day on Mountain Dragon …” (Ex. MOUNTAIN DRAGON is an Exercise previously delivered in the ABTC). We spend hundreds of man hours designing every scenario we deliver, tuning and ‘fettling’ in fine detail every event, every effect, every radio call and every message to ensure the environment represents reality as closely as possible. Why? Because it is vital our audiences make the decisions when presented with a rich and immersive synthetic environment within which the bad guys have a vote in exactly the same way as they would for real. After every mission, we deliver a pretty intrusive debrief in which we illicit the root cause of why a particular course of events transpired or didn’t transpire. We spend considerable time ‘building’ our debriefs prior to presenting them to the audience. 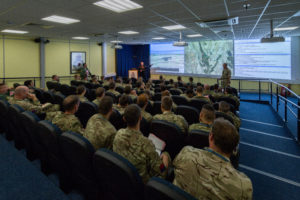 An Inzpire-led debrief at the ABTC

It is vital that we focus our wisdom and experience on getting the scenarios we design and deliver to be as close to real world operations as possible. When building and operating threat systems, we ensure their procedures and tactics are realistic, because our armed forces are having to face increasingly capable adversaries. We must train to these threats which, more than ever, require a step change in planning rigour and detail. We do it because we care about our service men and women, because we have all been there; we understand the challenges of working with kit that was procured for one purpose but now needs to adapt for another; and not always the optimum kit for its new requirement.

So, Inzpire strives to be different, and in doing so we are slowly changing the military/contractor relationship.

We do this because we want to make a difference; a positive difference. 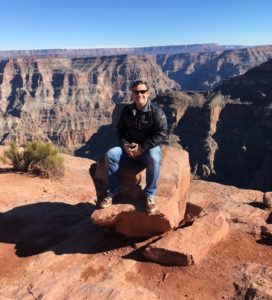 Enjoying some down time on one of the Inzpire trips to America, where we support a number of military exercises.