One of the teams we have recently started sponsoring is the RAF Equitation team, which encompasses the disciplines of Dressage, Show Jumping and Eventing. SAC(T)Liz Mawdsley, who is part of the team and one of those who has benefited from Inzpire's sponsorship, has written an end-of-year review to demonstrate some of the opportunities that have been afforded to her through her involvement with the club.

"What an amazing year thanks to the great opportunities that both the RAFEA and RAF Leeming Saddle Club provide!

In Aug 15 I got in the saddle for my first riding lesson at the young age of 30, having only ridden a few times as a child on my aunties horse. At the end of the lesson I noticed a few members of the RAF Leeming Saddle Club stood outside the arena at the yard. They told me about the club and how to get involved.

In the Sep 16 I had my first club lesson; I felt so welcomed and encouraged by the team it was amazing! As the months went on and the weekly club lessons progressed my riding skills improved and finally in Feb 2016 I did my first ever jump… 40 cm I was petrified!

As a committee member there were many talks about Inter-Station League (ISL) and who would make the team. I was encouraged to participate but at this point I was only jumping at 50cm and had never done dressage test. Over the weeks running up to the ISL at RAF Valley, I pushed myself to the limits and focused all the time I could spare on increasing my jumping height and completing my first dressage test. In Apr 16 I entered my first Dressage comp at my yard and Club members turned out to support me. I was so grateful they were there as I was riddled with nerves.

The months flew by and my target of reaching 75cm for ISL seemed to be getting closer but also so further away! Thanks to the RAF Leeming Saddle Club running 1 and 2 day training events, I got there and on the Tues before RAF Valley ISL, I jumped a local competition at 75… YES I did it!

ISL was fabulous a real mixture of emotions but an overwhelming opportunity. Completing a Dressage test and Show Jumping course in one day on a horse I’d never met before with only 10 minutes to ride it before the test was daunting …but exciting too.

With valuable lessons learnt from RAF Valley ISL, I took the time to start focusing on my balance and seat position. Although I had stopped increasing my jumping height I was still determined to better myself and continued to train at 75cm in preparation for our home ISL match against RAF Lossimouth, and that’s when it all happened; my first hard fall just 3 weeks before our match, I came off and bruised my back and pelvis landing on the hard ground after a jump. After a week of strong anti-inflammatories and pain killers I was determined to get back on and I did albeit extremely scared and unsure, lacking in self-belief.

Home ISL match was nerve racking as I had not jumped since my fall and was scare of a repeat performance, determined not to let my team down and with their support I entered the arena, we made it round until the final jump when I flew forward out of the saddle and landed on the pony’s neck, as I tried to reseat myself into the saddle I lost my stirrup and fell to the ground! No physical injuries but mentally I was done with jumping.

Over the following weeks I stuck to ground work and concentrated on having fun. OIC Leeming Saddle Club mentioned about RAFEA Training happening at RAF Cramwell and had put me forward as I owned my own horse. Sqn Ldr Dawson explained what an amazing opportunity it was, so I agreed to go but was extremely apprehensive.

RAFEA Training started I was a nervous wreck and explained to the group what had happened and what I hoped to achieve from the training. Day one of the training we did pole work in the morning and jumping in the afternoon. I was apprehensive going into the afternoon lesson but by the end of it I was on a high, I managed to jump several jumps and had stayed on!! The second day was cross country day and despite the rain we did simulated cross country jumps in the morning, where I did my first corner and ladder jump I was on a high and raring to get out on the cross country in the afternoon. The afternoon was amazing having never jumped many of the combinations or objects before. The training had given me my confidence back thanks to a fantastic instructor and the support from the other members.

Two weeks later was the RAF Championships and I was now rearing to go. Still on a high and feeling confident after the training week, I entered into the 2-day event BE90(96) and 75cm Show Jumps on Saturday and my first every cross country at 70cm on the Sunday. The atmosphere was so calm from the moment we arrived, smiling faces and cheerful people filled the stable blocks.

I’d never experience anything like it before; this was to be my first away competition and only the 3rd time my Pony had left the yard she was brought up on. Everyone was so friendly and supportive it felt like a huge family despite never meeting anyone before that day.

One the Saturday morning as I got ready to do my dressage I knew it was going to be a long hard day as my little girl ‘Penny’ was on fire! With her ears pricked and prancing feet we headed to the competition area. Penny was full of it, but I was determined to get the energy from her and gain some control! We entered the warm up arena for the Dressage and after a short period we were called into the main arena and she was off! There was no trotting or walking in our test …Penny just wanted to canter it all! It must have been the quickest dressage test known to man! “Well nothing I could do now” I thought so back to the stables we go for a rest before Show Jumping later.

After a good lung to calm her down we went to the warm up again ready to jump, full of fizz and rearing to go again we entered into our Show Jumping round and she was off. What a high - before I knew it we were done and with such a great sense of achievement we had completed our first day days competition at the RAF Championships.

Day 2 came and I was so excited my first cross country. Yet again my little girl was full of it! Tacked up and ready to go we went to the warm up jumped one of the practice jumps then it was our turn on the course ears pricked and snorting with excitement Penny took me to the starting box and we were off - my girl flew, took it in her stride and cleared the first five obstacles then into the wood. But the daunting Castle jump in the dark woods was too scary. The brakes came on. But I knew I had to be firm and confident and as a team, we cleared it on our second attempt. We continued galloping through the wood, narrowly missing a trespassing dog, we continued to go clear through the sunken road, over the carrot top jump, thankfully no stops for a carrot, and onto the home straight. Water jump 'arrggghh,'. Penny hit the brakes twice then on the third attempt bunny hopped in. We cleared the final two jumps and we finished! With adrenalin still pumping we completed our first major RAF Level competition with such an immense high.

I was so happy with what I had managed to achieve in just a year and being a complete novice, I did not expect to be placed. So when it was announced that I got 5th in the 2 day Lancaster event I was over the moon. I could not have done this without t the great support from the RAF Leeming team and RAFEA’s support; thanks to all their work and encouragement, they gave me the confidence and opportunities to continue my dream of entering the RAF Champs" 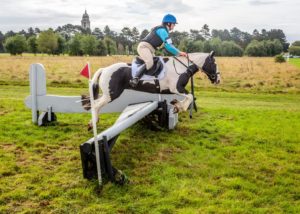