Little did I know that I would be entering work life a little earlier than I had planned; and I don’t regret my decision at all!

During my time at secondary school and sixth form there was a massive push for all students to attend University, even if the profession they wanted to pursue didn’t necessarily require a degree. The thought of an apprenticeship had never really occurred to me, but I always knew I couldn’t handle the 3 years of lectures and the debt associated with attending University. I needed a different challenge.

I looked at the Science, Technology, Engineering and Maths (STEM) scene in Lincoln – there is one and it is growing fast – which is how I found Inzpire. I instantly knew that the Company was in my sweet spot; I have strong family ties to the forces and have a passion for aviation and STEM. I enquired about potential work experience during the summer between my 2 years in sixth form. I had heard nothing but brilliant things about Inzpire and, being a self-confessed geek, was amazed by the GECO System produced by the Company’s Mission Systems team. During my work experience I was introduced to all the roles and capabilities within the Mission Systems team, from building a network to being shown how code is developed, how this code was tested and how the project managers tie this all together to move the project forward. This experience completely solidified my aspiration to work for Inzpire.

After my week’s work experience I seemed to have impressed the Mission Systems team - I'm sure my studies in Computer Science and Physics also helped! The team suggested that I would be a strong candidate to become an apprentice and that I should seriously consider this once I’d completed my A-Levels. Well, fast-forward 9 months, and after a quick chat with the Mission Systems team to figure out a plan that would work for us both, I was in receipt of an offer of an apprenticeship.

A few months later my life was completely flipped. I went from going to prom and sitting in A-Level Maths, learning about probability and equations of planes and lines to helping build GECO Systems that were delivered to front line military combat air and rotary wing users in the UK and internationally. Obviously there are a few major differences between school and working life! The longer hours and increased work load were an eye-opener, but made opening my first pay packet a great personal achievement. I think I’ve learnt more in my first 4 months with Inzpire than I did during sixth form! 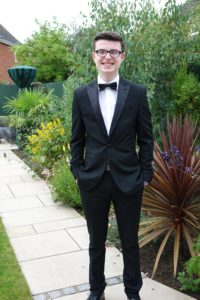