Home / News & Blog / A Fantastic Winter for the RAF Snowboarders!

The last 4 weeks at the RAF and inter-service alpine championships were filled with twists and turns, making it hard to sum-up. The two words that spring to mind, however, would be success and despair.

The 4 weeks of competition are split into 3 phases, the first being 2 weeks at the RAF champs at Saalbach-Hinterglemm, followed by a week of training over in the adjacent valley on the Kitzsteinhorn glacier before culminating for a final week in Meribel for the inter-service championships; the ultimate focus of all the training throughout the year.

Arriving in Hinterglemm, there was an obvious buzz about the team, everyone was on good form and there were some new talented riders. At this early stage, we felt confident that we would be taking a strong team to the inters.

Disappointingly, over the initial 2 weeks, 5 male and 2 female riders had suffered significant injuries and could not progress to the next stage of competition. Our promising team was dwindling at an alarming rate.

Progressing into training week, the setup at Kitzsteinhorn was outstanding, with excellent race pistes and a world class snowpark, which we made the most of thanks to our excellent coaching team. The week passed all too quickly and soon it was time to commence our annual pilgrimage to Meribel.

Now in team kit, we felt focused and unified as a team as we made our way to the boarder cross course to kick off the competition. Boarder cross is always eventful, famed for the carnage which ensues when you send 4 highly motivated riders down a course with jumps, bumps, berms and wu-tangs. 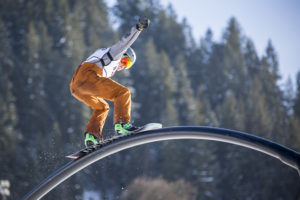 Despite a respectable qualification round, you never know how things will turn pan out in boarder cross. As things unfolded, there were the usual ups and downs as our riders either progressed or got knocked out. We eventually battled our way onto both podiums as Sqn Ldr Nat Feeney achieved her first medal at the inters, coming 2nd, and myself winning the men’s.

Moving onto the Parallel Giant Slalom (PGS), we knew we had to regain some points to remain competitive in the overall standings, and we did just that. Things never go entirely according to plan in snowboarding; some of our best riders made costly errors ruling themselves out of the final that was held that evening under the floodlights of the icy ‘Stad’.

After numerous rounds of nail biting competition, our women took the overall prize for the event, putting themselves firmly back in contention, whilst the men clung to a consistent second place. Fortunately for the men, the Army and the Navy had taken an event each, meaning it was all open for the last event. Encouragingly, the RAF won top spot on both podiums with Wg Cdr Claire Collis and myself taking another gold for the team.

The final slopestyle event, is without a doubt the snowboarders’ favourite, giving the riders the chance to showcase their flips, spins, grabs and rail slides. Both the men’s and ladies’ teams qualified respectably for the final but the overall title was still anyone’s to play for. 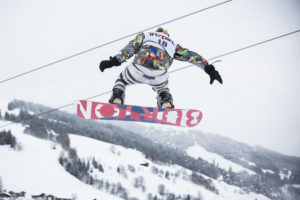 As the women excelled in their final with Wg Cdr Claire Collis and Flt Lt Lou Page securing 1st and 3rd place, they clinched their second team title and looked set to win the overall event. The men, meanwhile, commenced training on a lower part of the course. With only a morning to get to grips with the new larger features, we had to motivate ourselves to get over the natural fear. Unfortunately, during the process, Flt Lt Mark Wecki crashed out by under rotating a heroic backflip causing himself a minor concussion. Losing Mark from the competition was a blow to team morale and the men’s chances.

The men’s final commenced: this comprised of 2 runs with the best run to count. Having put down a ‘safety’ run, I was sitting in 3rd place after run 1. Sat above me in 2nd was SAC Tech Adam ‘Alan’ Wooley, who pulled out a blinder of a first run, landing a stunning 720. The Navy were currently in 1st!

As the last few riders dropped in, the number one seed from the Navy took my place, pushing me into 4th. Having agreed a game plan with my coach, I knew it was time to pull out all the stops. I was about to incorporate two new tricks into my run, which I had not landed in practice. It was high-risk, but necessary to get back on the podium and score the team valuable points. To my amazement I landed the run! Sitting at the bottom of the park, I waited impatiently for Adam to complete his run, knowing he would have my score. When he eventually arrived, he held the silence for as long as he could before grinning and explaining that I had leaped into 1st. I immediately pointed out that meant we were both on the podium, to Adam’s utter disbelief and delight.

We had secured 1st and 3rd on the men’s podium in the final event, but the Navy had taken the slopestyle event on points overall . It never really occurred to us that we could have won the overall until we received a message later that night informing us that we had won both the overall team titles for the first time since 2005 (we think) on the RAF’s 100th year! 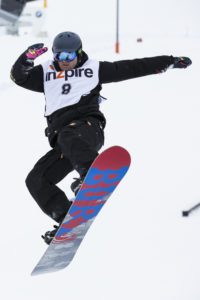 We had achieved our ultimate goal, despite the attrition of team riders. The encouraging thing is, we now have strength in depth with our team and new talent to develop. Next year we obviously hope to retain our titles, but also to bring along some new riders to ensure our breadth and depth of talent endures.

Overall, it was a resounding success for the RAF Snowboard team. With various twists and turns, it never looked certain, but to our relief, the hard work over the last few years has finally paid off.

Hoping to consolidate on this success, a few of the RAF team are selected to compete at the British Champs in Laax this month. Although we won’t be in RAF kit, we will still have the RAF team at heart! 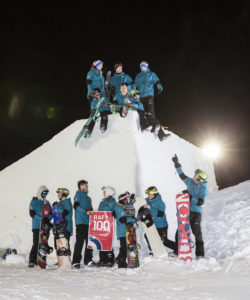