As I grew up the technology available to craft my army of robots, spaceships and cars developed rapidly. Before long the first family computer turned up and I soon graduated from the school of bricks to the world of computer programming. As technology marched on to the tune of Moore’s Law, I embarked on my own technological adventure, learning the difference between RAM and ROM, what a byte was and how many bits were in a nibble. Unsurprisingly, I soon found myself at university studying Software Engineering. But then I panicked. This was back in the days when the word ‘geek’ was an insult, when knowing technology inside out got you neither street cred nor girls, and I never got to keep my lunch money. So I decided I didn’t want to go into the world of technology, I wanted to do something cooler, I wanted to be a Fast Jet Pilot in the RAF, flying the latest generation technology and high-fiving everybody whilst wearing aviators.

It was with a great sense of irony that, three years later, I found myself posted to the front line to fly the Puma HC1 helicopter, probably the RAF’s least technologically advanced aircraft with a navigational computer that had less memory than my first family computer 25+ years ago. Despite all of this I loved the Puma. She was a dream to fly and because of her lack of technology flying her was brutally challenging but extremely fun. Despite loving being a Pilot, my technology cravings never really disappeared, so I was thrilled to be introduced to Inzpire’s GECO Software, a Military Electronic Flight Bag (EFB) and Wires Awareness Tablet, when it was delivered to the Joint Helicopter Command. For an aircraft whose navigational equipment consisted of an arrow pointing roughly in the direction you needed to go in, the arrival of a digital moving map with a fully integrated electronic flight bag was an incredible capability enhancement. The software was intuitive and powerful and the situational awareness GECO provided got me out of a number of hairy situations usually involving bad weather and low fuel. 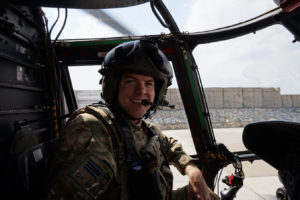 Me during my time as a Puma pilot

You should have seen my excitement when 2 years later we got our hands on the full blown GECO Mission Support System as part of the upgrade to the Puma HC2. GECO MSS massively reduced both the amount of time and effort involved in planning complicated military sorties. This extra time could then be spent studying the important parts of the mission and making use of GECO’s powerful 3D mission rehearsal tool to ‘fly-through’ a sortie in preparation for its execution. This, coupled with Inzpire’s ‘can-do’ attitude and user centric Software design approach, meant that we had a direct input into the software allowing us to shape the way it looked and worked.

Being a Puma operator you soon get used to being the ugly stepchild at the majority of military exercises. You could never lift as much as a Chinook, fly for as long as a Merlin or make things explode as effortlessly as an Apache. GECO MSS was our trump card. This would be how we would get our lunch money back! 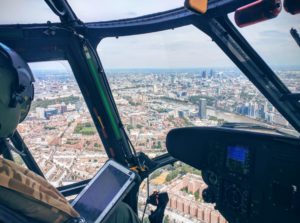 The extra situational awareness and ease of planning it brought made us the envy of the Support Helicopter Force. We’d have to constantly stop other helicopter crews from pinching our MSS equipment whilst on exercise and at one massive NATO exercise in Europe, GECO was used to drive the entire multi-platform mission planning process: from plotting the Combat Air Patrols for German Eurofighters, determining surface-to-air threat positions for French Mirages to the Spanish Ground Commander choosing helicopter landing sites from its imagery; GECO more than proved its worth.

It wasn’t long after this NATO exercise that I found myself craving the opportunity to go ‘full-geek’ in a more technical role but struggling to find it within the RAF. I approached Inzpire’s Mission Systems Team and I found myself not attending an interview, but having to put my money where my mouth was and produce two pieces of software to impress the company’s Chief Software Architect. Before I knew it Inzpire had agreed to employ me and would fully support my endeavour to strike a work-life-balance, allowing me to work from home in Oxfordshire and spend only half my week in their Lincolnshire offices.

Fast forward six months and I now find myself a Software Developer working within Inzpire’s Mission Systems Group blending my love of technology with time spent in the cockpit to help build the next generation of world-leading mission planning software. Being part of such a fast-paced environment and working with the latest technology alongside true experts in their field is truly exhilarating. If this isn’t Inzpiring(!) I don’t know what is.