This includes our support of Exercise ATLANTIC UBIQUE which marked the tercentenary of the Royal Regiment of Artillery. The Expedition challenged Soldiers and Officers of the Royal Regiment of Artillery to sail around the Atlantic Ocean on the Royal Artillery Yacht club’s flagship, St Barbara V. Serving in extreme environments and working in small teams, over 150 Regular and Reserve soldiers made up the crews that completed each leg of the 11 month long expedition.

On Monday 8th August RAYC Yacht Saint Barbara V conducted the final fast sail of Leg 17 from the Isle of Wight into her home port of Portsmouth, escorted by the RAYC Yacht Bombardier III which was crewed by the Exercise management team. She was met at sea by the Admiral RAYC, Lord Richards, sailing his own yacht, at the entrance to Portsmouth.

I had the privilege to take the helm for the run home through the Cowes Week fleet, flying the Army Adventure Training Group and Inzpire battle flags and completing 9000 mile round trip.

The crew from 32nd Regiment Royal Artillery, who had spent the last month at sea were met by a Champagne welcoming party and an impromptu Spitfire Fly Past. Their arrival marked the end of a highly successful challenge that allowed Soldiers and Officers from the Regular and Reserve forces achieve an experience of a lifetime.

The crews have seen much over the 11 months of the adventure and the value of their experiences can be best summed up by comments from the skippers and crew.

Andy Bristow, the Skipper for leg 4 explained: “On a boat, perhaps more significantly than in any other environment, every action has a consequence somewhere else on board, and understanding that mutual dependence is critical. Such is the value of adventurous training of this nature; Junior Officers and NCOs learning by making genuine decisions which will determine whether a team will survive, merely function, or thrive. Leadership is real, exposed for better or worse, encouraging others to serve and make their own contribution uncomplainingly despite being often uncomfortable, probably uncertain and occasionally even downright scared. There is no safety net and no manual”. 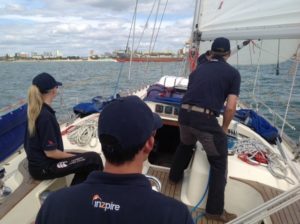 Robin Baker, the Skipper for the final Transatlantic Leg said: “ The highlight for me, without a shadow of a doubt, was my first ocean passage as skipper complete with iceberg, growler, fog on Grand Banks and a sighting of the "Black Pearl" (or was it just rain?), whale abeam and dolphins galore”.

Inzpire have been proud to support such a worthy endeavour that has provided our service personnel with a challenge that enhances their ability to prepare for the rigours of service life. 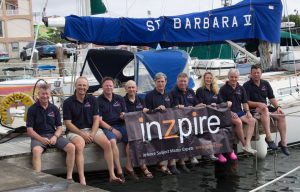