Many inside and outside the military would expect the military to man these positions themselves and therefore ask what is the need for these civilians?

Flying an Apache Attack Helicopter is, and will remain, many a young boy or girls dream and needless to say it would be the aspiration of many an adult also. Despite this and due to the helicopters immense success in the UK Armed Forces, the Attack Helicopter Force, along with many parts of the UK military, has seen a significant strain on manning levels over the past few years. Unrelenting operations have directly impacted the lives of service personnel and their families, and fatigue has taken its toll on members of the UK Apache Force. After such service it is understandable that some personnel will start to look for the next chapter in their Iives with different challenges.

In the civilian sector there has never been a shortage of demand for highly skilled helicopter aircrew as provided by the UK military. The UK Oil and Gas industry, the Helicopter Emergency Medical Service (HEMS) and the National Police Air Service (NPAS) are all keen to employ such highly skilled helicopter professionals as they leave the military. More latterly the burgeoning Middle Eastern militaries with their growing military ambitions will pay high premiums for ex-UK military aircrew, hoping to replicate the professional capability of our military.

While these draws impact on the UK military personnel numbers, the true impact is actually much greater. A UK military instructor is selected from the more experienced cadre of military aircrew and invariably possesses significant operational experience, flying skill and teaching potential. The loss of instructors to the external aviation market therefore impacts not only the ability to maintain the current capability of an aviation force, but also the ability to develop the next generation of aircrew and instructors.

So how do Inzpire help the Apache Force to maintain their high standards of capability? Inzpire seeks to help prevent the loss of military experience to other commercial aviation markets. The reasons for personnel leaving the military in increasing numbers has and will continue to be debated. Factors cited include operational fatigue, societal changes, pension changes and a host of other reasons. What is certain is that the external market is buoyant and shows no sign of relenting. A drop in jobs in the oil and gas sector has been replaced by Middle Eastern opportunities and of course HEMS and NPAS still need aircrew as well as the broader commercial market.

As acknowledged by Service Chiefs, the future success of the UK military is reliant upon the Whole Force Approach, that is to say a considered blend of regular military, territorials and specialist contracted civilians. As Major General Felton, Commander of the UK Joint Helicopter Command noted, the helicopter force of the future needs to use military personnel where essential and civilian personnel where possible, a sentiment entirely in line with the use of CQHIs.

The cost of training a military pilot is measured in millions of pounds, but the value of a highly skilled and experienced pilot is immeasurable. Inzpire offers employment to high end aircrew who have decided that they have reached the end of their military careers but still wish to use their experience and skills to benefit the military. In return the military benefits from the experience of personnel in whom they have invested a great deal of money and time and operational units can maintain higher experience levels as they do not need to backfill the training cadre.

There is of course a balance to be struck. Inzpire is committed to the Whole Force Approach and does not believe that a simple transition of instructors from the military to a civilian provider will help address the manning issues. Inzpire has taken a proactive stance on the Whole Force Approach with self-imposed rules to ensure we add capability but equally do not drain from the military. Inzpire does not accept CVs from personnel still serving and will only discuss opportunities with those who have signed off from the military. We also offer the right of veto to the military which allows commanders to inform anyone planning to leave in the hope of gaining a post with Inzpire that it could be blocked. Inzpire works closely with our military customers to track potential candidates whom have already left the service and has pulled people back from the elsewhere in the civilian sector to add to the military Manning pool. 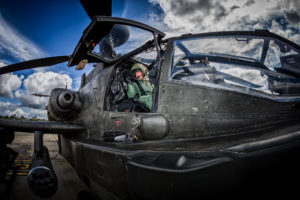 So what does Inzpire offer the individual? Competition will always be fierce for aircrew with such high levels of experience and qualifications and Inzpire faces many of the same challenges with respect to retention as the military. So Inzpire decided to be a different type of company and offer a very different workplace to traditional faceless primes. Inzpire prides itself on maintaining a military ethos and close knit family feel. Despite the varied areas of expertise and the geographical spread of its employees and interests; Inzpire ensures that each individual understands how much they are valued and shares its success with all employees. Through the company share scheme every employee owns a bit of Inzpire and is invested in its continued success. Employee satisfaction is evidenced by its place in the Sunday Times list of the best companies to work for.

Inzpire is not the sole answer to military manning shortages but as part of the Whole Force Approach it can and does play its part. We are a forward looking and ever growing company intent on revolutionising the industry-defence relationship for the customer and its employees with a very clear vision to be the most respected defence company in the world, not necessarily the biggest or most profitable.