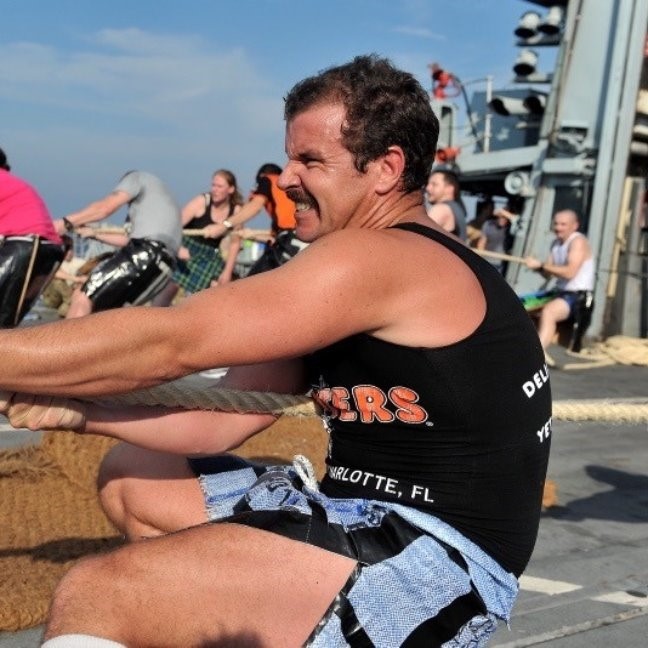 Doc is pictured during Op Kipion on HMS Montrose during a ‘tug of war’ final at the petty officers’ mess and wardroom, which they won!

We are delighted to welcome David ‘Doc’ Finlay to our Cyber Investigations Management team in a product manager position following 22 years of service in the Royal Navy.

Doc joined the Royal Navy in 1998 as an operator/maintainer in communications. On completion of his initial training at HMS Raleigh and his trade training at HMS Collingwood, his first posting was HMS Iron Duke serving two years which included Operation Allied Force in the Mediterranean.

During a cheerful and contented career, Doc enjoyed many varied opportunities both on land and sea. Between 2002-2010 he was deployed to numerous units which included HMS Sheffield on West Indian Guard Ship duties – to CTF 345 commitments in Northwood – which allowed him to develop in all aspects of his professional career.

Promoted to chief petty officer in 2015, Doc was part of the Satellite Fulfilment Team providing military and commercial communication requirements for the fleet. When selected to take the planned outages director position within the Global Operations Security Control Centre operating environment – he provided direction and guidance to the Information Systems and Services (ISS), and delivery partner project boards, in relation to major transformation and technical refresh programmes. This included MODNet and Global Connectivity migration, culminating in a 3* commendation from the chief executive officer of ISS.

Doc lives in Norfolk with his wife Eleanor, their daughters, and a springer spaniel. His time is seized by their girls’ hobbies and interests; however, he enjoys running and keeping fit and is looking into new educational endeavours.

Doc is very much looking forward to meeting the new team and becoming part of the Inzpire family.