Lincoln-based Inzpire Limited is one of 27 companies worldwide recognised by Lockheed Martin Rotary and Mission Systems as an Elite Supplier in 2020, and one of only two non-U.S. companies to be included on the list.

The Elite Supplier Award recognises companies which have an outstanding delivery and quality performance as well as an excellent customer focused approach. Suppliers are included on the list based on a number of factors including the reliability of delivered products and services; delivering on time and within budget; proactively solving problems; and aligning with Lockheed Martin’s company values.

The award recognises Inzpire’s outstanding delivery of its industry-leading GECO mission planning system for use with the Texan T6 element of the UK Military Flying Training System. The inclusion of Inzpire on the Elite Suppliers list is testament to the company’s demonstrated high-quality performance and customer-focused approach in meeting Lockheed Martin’s requirements. 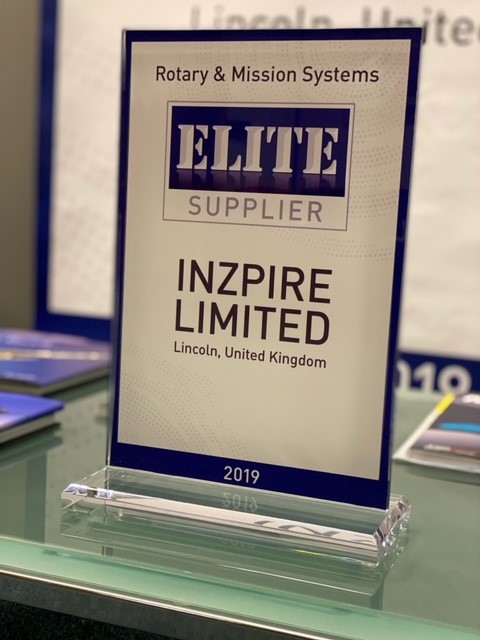 Inzpire’s Head of Products, Jonny Smith, received the award (virtually) from Abby Lilly, VP Global Supply Chain of Lockheed Martin Rotary and Mission Systems on 3 August 2020.  Following receipt of the award, Smith explained: “To be recognised in this way by one of the giants of the global aerospace and defence industry is a great honour for Inzpire.”

"The award is evidence of the outstanding team at Inzpire and is a demonstration of the value that a relatively small, agile, high-capability organisation can bring.  It has been a great experience working with Lockheed Martin and other stakeholders within the UK military Flying Training System.  We are very proud to be able to play a role in the development of a safe and successful flying training system for next generation of the UK’s military aviators.”

Inzpire’s Mission Systems Division produces the hugely innovative and highly regarded GECO family of mission systems. There are over 400 GECO Systems in service with the UK Royal Navy, Army Air Corps and Royal Air Force, and Inzpire’s overseas customers which include the Royal Jordanian Air Force and the Indonesian Air Force.

Headquartered in Bethesda, Maryland, Lockheed Martin is a global security and aerospace company that employs approximately 110,000 people worldwide and is principally engaged in the research, design, development, manufacture, integration and sustainment of advanced technology systems, products and services.