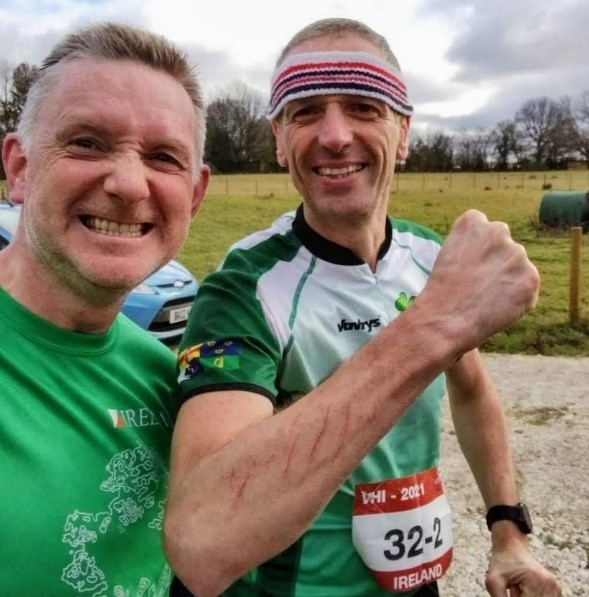 Philip Johnston-Davis (right) and one of his team mates brandishing their battle scars from their latest competition!

Inzpire’s Philip Johnston-Davis represented Ireland at international level for the fourth year at the orienteering Veteran Home Internationals competition on 4 and 5 Dec 21, placing 7/8 in the individual age class race and finishing 8/12 on his leg of the relay race.

Following strong performances during a reduced season, including age-class championships wins in the East Midlands and Northern Ireland, Philip was re-selected for the all-Ireland veterans team to complete against the Welsh, Scottish and England team at the first fixture since Sep 2019. The Veteran Home Internationals is one of three annual Home Internationals held by the orienteering community for a team of 12 men and 12 women covering the age classes between 35 and 70.

This year’s individual race was held on Sat 4 Dec on Winterfold and Pitch Hill, a quality area of mixed forest on a sandstone ridge with steep scarp and dip slopes with intricate contour detail and mature tree cover, previously used for the Orienteering Word Cup. Philip ran a steady race on the 8.6km course with 320m climb making a small number of route-choice decisions that cost him 2-3 minutes apiece across his 93-minute finishing time. One was an error in judgment between accepting a short leg of track and path running that would have added approximately 300m versus his selected direct line route with more complex navigation and an extra 25 metres of climb. You can view Philip’s route on the map here. 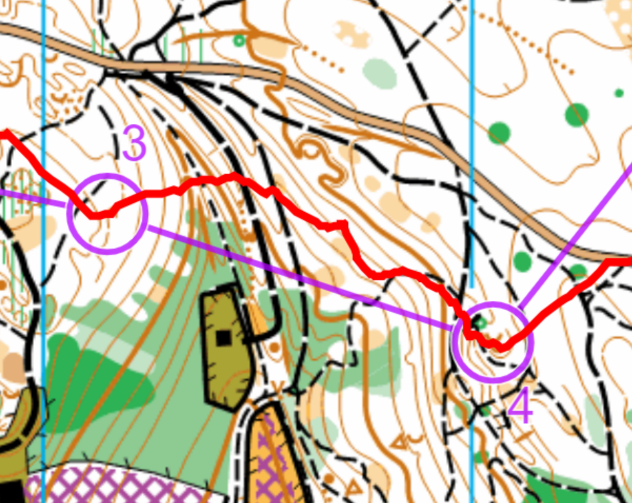 On Sun 5 Dec the competition moved to Glovers Wood, a small but very fast, runnable area just under the Gatwick flight path that is flat except one steep-sided stream valley that was crossed 8 times during the 4.2km course. Philip took second leg position in a Woman-Man-Woman relay team that finished in 12th overall but he placed 8/12 for his leg with a steady performance with no major errors. Philip's route is available here.

Philip contracted Covid-19 in early Nov 21 and was therefore recovering from a period of enforced rest and reduced physical fitness at a critical time of preparation for internation-level racing. He described the impact on his performance as if someone had disconnected his turbocharger, reducing his ability to ‘put his foot down’ when there were opportunities to run hard, such as on the 10+ minute legs on the individual race. However he was satisfied to have acquitted himself with a reduced VO2max performance, making a scoring contribution to Team Ireland in both individual and relay disciplines, and not finishing last on either race.

With a depleted Ireland travelling team – the competition arranged at relatively short notice and subject to last-minute change in travel Covid testing regime – it was sadly not surprising to see the home nations finish in their most common order - England, Scotland, Wales and Ireland. There is hope for an effective challenge to Wales to regain the Stonewall Trophy (Wales vs Ireland) in 2022 with a full team thanks to some top-three individual Irish performances.

100 Years since Northern Ireland was Created

With this fourth cap Philip marks another family anniversary. While Ireland was coming to terms in 1921 with the partition of the island into Northern and Southern Ireland, Philip’s great-grandfather Bobby Mills was busy captaining the Irish association football team in a home international against England and the final truly all-island international against France. This makes an interesting family link to representing the whole island of Ireland at the time of the 100th anniversary of the creation of his home part of the UK. Meanwhile orienteering, like Rugby Union, remains an all-Ireland association; and coincidentally Philip’s father was also an international, almost half-way between these football and orienteering family members in 1975, albeit appearing for the minnow Luxembourg! 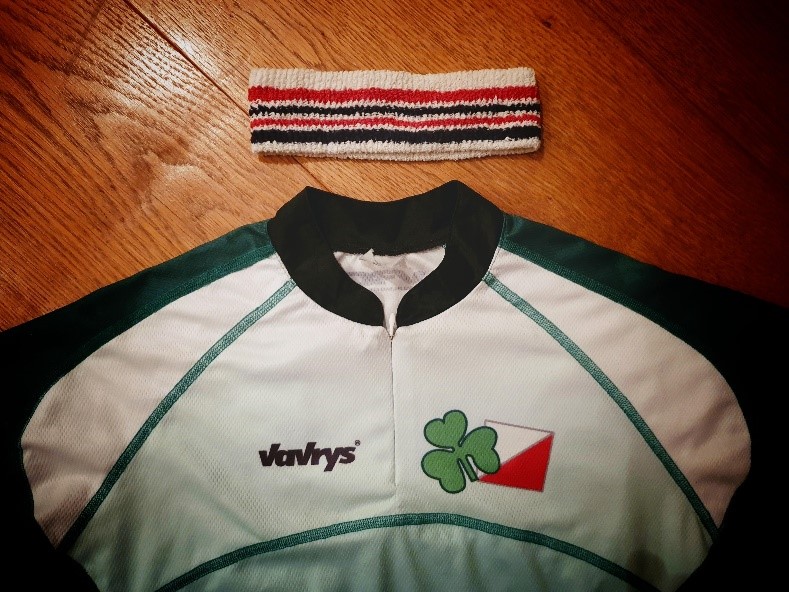 The Ireland Orienteering kit plus Philip’s father’s headband from his international rugby playing days, which Philip wore during this competition

Philip’s next senior representation is as part of the RAF team to take on RN and British Army at the 2021 (not a typo) Inter-Service Championships on 30 Jan 22.

Congratualtions on your latest achievements Philip, and good luck for the Inter-Service Championships.