Some slightly-more-veteran aviators might, and for sure anyone who flew the RAF Wessex helicopter in the mid-1990s will. Decca was a seemingly bewildering array of dials that span and dervished in various jerky movements which, if interpreted correctly, could allow one to fine ones position on a map. It has been interesting to observe the evolution from this Second World War vintage navigation system to today’s sophisticated GPS-fed digital moving maps, such as Inzpire's GECO.

I suppose Decca was a bit like GPS; if you stretch your imagination! Decca signals were transmitted from fixed ground locations, analogous to today’s GPS satellite transmissions. The aircraft equipment interpreted the signals (I’m not sure how; Doppler and modulation likely comes in to it somewhere) to determine how far the aircraft was from each aerial. Using 3 aerials (red, green and blue) one could determine ones position. Here the similarity with GPS ends. First, Decca didn’t actually tell you your position; rather you used the whirling-dial information to plot an area that you were ‘likely to be in’ on a map; called the triangle of possibility, or was it probability. Depending on how far you were from the fixed aerials, and the atmospheric conditions on the day, this triangle could be a few square miles in area. The added ‘fun’ with Decca was the time it took to interpret all the spinning needles previously mentioned, and then transpose the information to a suitably marked Decca Map, emblazoned with blue arcs from the blue aerial transmissions, reds arcs from the red transmissions, and green from the green. Great fun, especially at night. Oh, and by the time you’d done this, the aircraft had moved on……at a blistering (I was in a Wessex, remember) 1.5 miles a minute! Decca was pretty painful…I recall that it was originally developed for ships!

The aircraft’s Decca aerials were housed in a box, like a very large suitcase, on the underside of fuselage, making ground-clearance minimal; hey-presto, one of two occasions when I dented one of HM’s aircraft, landing one night on uneven ground and denting the Decca-box…….the other time I dented one of HM’s aircraft earnt me the nickname 'Strimmer', but that’s another blog!

I saw my first aircraft GPS in about 1994. It looked like an old car radio, and was mounted atop the Wessex combing. It was simple…..but it was a revelation. Ones position was instantly presented as an 8-figure grid (or lat-long) and all that was then needed was a nifty bit of potting on a paper map, and you knew where you were. The device could store pre-programmed waypoints, and would provide a steer and distance to a selected point. The Wessex was heading for retirement and so this ‘bolt-on’ arrangement sufficed for the remainder of the aircraft’s service. On arriving at Odiham the Chinook was found to have a carlos-fandango GPS, built-in, far more user friendly, and with a host of additional navigation functions. But the paper map still dominated the cockpit, and clock-map-ground navigation was still practiced……how I craved a moving map, like I’d heard the fast jets had; why them and not us?!

A rudimentary GPS and a paper map remained the norm for me right through to my last flying tour. I now look in envy on today’s helicopter crews who routinely fly with a GPS-fed moving map. No paper maps cluttering the cockpit, no cursing pre-flight when you found all your fine-black Staedtler pens have dried up in your nav bag, or your SH nav-rule has snapped, or worse still your tried-and-tested never-fail map-fablonning technique failed miserably! My last aircraft was the RAF‘s Puma, now flying on operations with the GECO hand-held GPS-fed digital moving map…how I’d have loved to have had a GECO on the long night duties flying in poor weather on my first tour all those years ago. 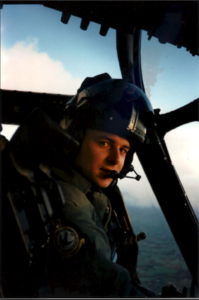